A Horrible Incident, a Delightful Find


The 2013 Dracula exhibition in Milano, Dracula e il mito dei vampiri, recently moved East, opening in a new reincarnation at the National Museum of History in Taipei, Taiwan. As one can see in the videos above and below, the exhibition elaborates along the lines of the Milanese exhibition, while also including e.g. Asian vampire comics. Despite the macabre subject, the exhibition is promoted in a humorous and family friendly way, and I am sure that the very young visitors shown in the youtube videos were in for a treat.

What, however, is of particular interest here is a reproduction of what appears to be the cover of a pamphlet that the museum has posted on Facebook. The pamphlet is the very rare Entsetzliche Begebenheit, Welche sich in dem Dorff Kisolova / ohnweit Belgard in Ober-Ungarn / vor einigen Tagen zugetragen, a reprint of Provisor Frombald's report about the purported vampire Peter Plogojowitz in the Serbian village Kisiljevo, at the time referred to as Kisolova (note also the misspelling of Belgrade).

This pamphlet is so rare that Schroeder, Hamberger et al only knew the title, because Stefan Hock back in 1900 in his literatury study of the vampire, Die Vampyrsagen und ihre Verwertung in der deutschen Literatur, mentions it in a note, himself referring the reader to the Austria from 1843, i.e. Austria oder Österreischischer Universal-Kalender für das gemeine Jahr 1843, as his source. The Austria contains a transcript of the pamphlet, but here, finally, of all places, a reproduction of the cover turns up not only on Facebook, but also in the youtube video above!

Neither a place of printing nor a more exact date of publishing than the year appears on the cover.

For more on the pamphlet, see this post from 2013. 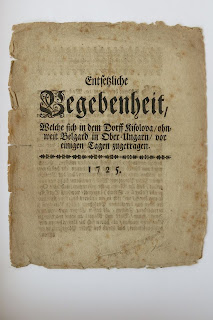