Trusting Peter Haining or not

How 'Arnold Paul' became a 'High Duke of Medreigia', I posted about some years ago. Peter Haining was the perpretator behind this curious misrepresentation of the famous 1732 Visum & Repertum. As I noted back then, in my youth I was initially impressed by Haining's prolific production of books, but later on I became increasingly sceptical of his research. Another instance is mentioned in a post under the title Another Haining Fraud on the Wormwoodiana blog, which concludes that 'it has become increasingly apparent that you can’t trust Peter Haining on anything.' 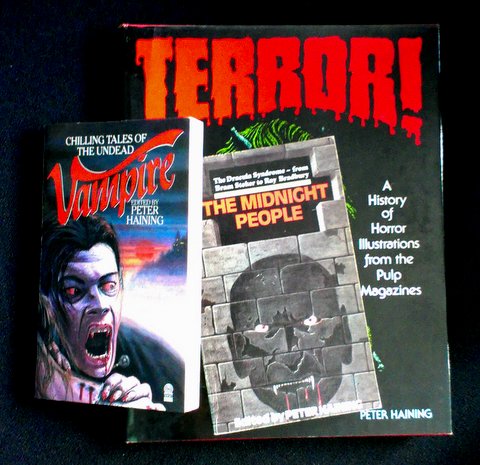 According to an obituary in The Guardian, the incredibly productive author, compiler and editor Peter Alexander Haining (1940-2007) 'was rooted in, and sustained by, a childhood passion for hidden nuggets of terror, witchcraft and crime.'  From 1963 to 1972 he was editor at New English Library, and readers of his books and anthologies - or indeed anyone interested in British paperbacks published in the Seventies - may enjoy watching this video about NEL and its books and authors that includes an interview with Haining himself.

I've become disenchanted with Haining, too. I uncovered another 'error' in his coverage of the nosferatu, here and here.

I still respect him for his ability to source obscure works, but researchers should definitely double-check the original material.