'Vampire' burials that can change a research life

Anthropology PhD student and blogger, Katy Meyers, recently wrote of a symposium on The Odd, the Unusual, and the Strange: Human Deviant Burials and their Cultural Contexts arranged by the Canadian Association of Physical Anthropologists:

'[Sandra] Garvie-Lok discussed the finding of a potential ‘vampire’ burial in Byzantine and Ottoman Greece. This was interesting because she examined first the ethnographic and historical evidence for the belief in vampires and the behavior towards them. Next, she used this information to interpret a burial from Ottoman-era Mytilene that due to the presence of stakes through the skeleton may indicate that people believed the deceased individual was a ‘vampire’. [Lauren] Hosek discussed a similar topic, the fear of revenants- individuals who rise from the dead. She discussed historic legends of revenants and archaeological evidence from two fortified settlement sites in what is now the Czech Republic. Several of these graves are consistent with the descriptions of potential revenants.' 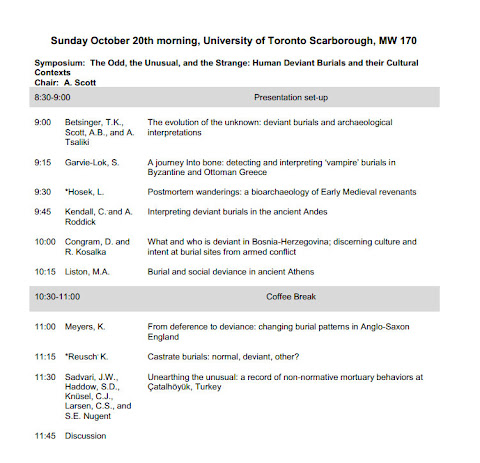 Sandra Garvie-Lok, an anthropologist from the University of Alberta, according to that university's web site was aided in her career by a 'vampire': 'It really did change my research life.'

'Garvie-Lok, an osteologist, was set to study North American sites until a fateful opportunity took her to the island of Lesbos in Greece, where she found herself with the skeleton of an alleged vampire from the Ottoman Empire. She became embroiled in ethnocultural history and vampire lore that would play a small part in her focusing on Greece and ancient civilizations. She says the vampire tales from that region and the pop-culture iterations of the undead bear little resemblance, especially when it comes to disposing of a vampire. And as for her own adventure as a vampire hunter, she says it’s an experience she’ll never forget.'

'She says the regional accounts of vampires are consistent from Greece all the way through to the Slavic states, and none of the stories had anything to do with bats, biting or blood loss. Instead, she says, the vampire was believed to be a demon-animated corpse who would chase and physically attack the living—much closer to current popular culture images of zombies. And unlike the Dracula lore, it was the vampire’s look—or even his breath—that could be deadly. Vampires were often blamed for weird noises and unexplained phenomena that would occur in towns.'

Garvie-Lok has also told her story in the Huffington Post.
Posted by Niels K. Petersen at 21:21

Fascinating stuff. Makes me wish I worked in that part of the world.