'Over 100 'Vampire' Graves Discovered in Bulgaria,' reports the Sofia news agency novinite after an interview with Bozhidar Dimitrov, head of the Bulgarian National History Museum, on the occasion of the archaeological find of two 'vampires' in the Black Sea town of Sozopol. Iron sticks had apparently been stabbed into the two bodies.

Dimitrov says, 'I do not know why an ordinary discovery like that became so popular. Perhaps because of the mysteriousness of the word "vampire." These people were believed to be evil while they were alive, and it was believed that they would become vampires once they are dead, continuing to torment people. (---) The curious thing is that there are no women among them. They were not afraid of witches.' 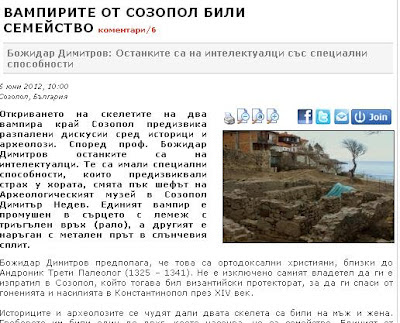 According to Wikipedia, 'Sozopol (Bulgarian: Созопол) is an ancient seaside town located 35 km south of Burgas on the southern Bulgarian Black Sea Coast. Today it is one of the major seaside resorts in the country, known for the Apollonia art and film festival (which takes place in early September) that is named after one of the town's ancient names.'
Posted by Niels K. Petersen at 10:03

This news story has now been picked up by Le Monde and The Daily Mail:

The vampire skeletons of Bulgaria: Human remains from Middle Ages found with iron rods staked through their chests.