Bringing the vampire back home...

'And that was how it was throughout Transylvania and Hungary and Bulgaria, and through all those countries where the peasants know that the living dead walk, and the legends of the vampires abound. In every village where we did encounter the vampire, it was the same.

"A mindless corpse?" the boy asked.

"Always," said the vampire. "When we found these creatures at all. I remember a handful at most. Sometimes we only watched them from a distance, all too familiar with their wagging, bovine heads, their haggard shoulders, their rotted, ragged clothing. In one hamlet it was a woman, only dead for perhaps a few months; the villagers had glimpsed her and knew her by name. It was she who gave us the only hope we were to experience after the monster in Transylvania, and that hope came to nothing. She fled from us through the forest and we ran after her, reaching out for her long black hair. Her white burial gown was soaked with dried blood, her fingers caked with the dirt of the grave. And her eyes ... they were mindless, empty, two pools that reflected the moon. No secrets, no truths, only despair."'

Anne Rice let her vampires meet 'the European vampire, the creature of the Old World,' only to find that it was a mindless corpse, devoid of the qualities that characterized her vampires from New Orleans, no doubt in particular those romantic qualities that has made an incredible number of readers gravitate to her Interview with the Vampire since its publication in 1976. Obviously, the village vampire was not an enticing subject, whereas more or less aristocratic and artistic anti-heroes and stories of alternate races whetted the appetite of readers, leading us on to the vampires of Twilight, all but annulling the essential characteristics of the vampire.

Popular fiction, however, has always had a fancy for adding some historical ingredients, and the supposed 'vampire' skeleton found in Venice has sparked an interest in exploring that connection. As mentioned previously, an episode of the Dr. Who series, Vampires of Venice, was set there, and I recently had opportunity to watch it. Unfortunately, it is strictly for kids only, providing nothing of interest to anyone interested in vampires - apart from the setting of a vampire story (ahem, they are actually aliens) in Venice (something that incidentally was also the case of Nosferatu a Venezia, sort of a sequel to Werner Herzog's Nosferatu).

The Venice connection has also inspired James Becker to write a riveting novel, The Nosferatu Scroll, the fourth in a series about British police detective Chris Bronson and his wife, the archaeologist Angelia Lewis. The novel combines vampiric skeletons in Venice with the notions behind the Vampir Prinzessin documentary, but ultimately, the story is simply an exciting horror and crime novel, not very dissimilar to a mix of Fred Vargas and Dan Brown, providing no particular insights into vampire history. It contains an author's note on vampires and the inspiration for the novel, including a photo of the brick in mouth skull from the Nuovo Lazzaretto. I am, however, sure that readers will be intrigued by the many locations in Venice that are visited in the novel, like the island of Poveglia. Certainly suggestions for thanatourism, if someone has an inclination for that.

The Vampyrus Serviensis is explored in a handful of novels. I have recently reviewed Un lieu incertain by Fred Vargas and Fear and Servant by Mirjana Novakovic, but the same subject has inspired Kinder des Judas by Markus Heitz, which includes historical persons like Glaser and Flückinger, and Totenbraut by Nina Blazon which is set in another part of Serbia but at the time of the famous Serbian vampire cases in Kisiljevo and Medvedja. Both authors, like James Becker, include some notes on their historical inspiration at the end of their novels, but Blazon has added some more information on her web site, and Heitz has published a popular book on vampires. 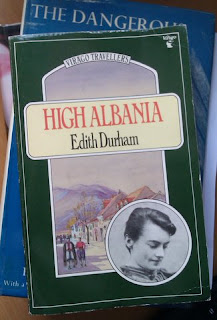 Whether we can in fact speak of a new trend in vampire fiction is, I think, hard to say, but perhaps more novels will be inspired by archaeological discoveries and the actual historical information we have, bringing the fiction vampire somewhat closer to its roots? That would require a bit of work on behalf of the novelists, but then Markus Heitz writes that he had so much fun out of creating a vampire novel in a historical setting that he might revisit the theme in the future.

I myself have no aspirations as a fictional author, although I once suggested how a novel à la Dan Brown could include some clues to vampires in Vienna, but I think that another source of inspiration for future vampire fiction could be travelogues, e.g. like those by Mary Edith Durham, a British woman travelling around the Balkans in the early 20th century. Like earlier travellers through the region, she learned about the local customs and beliefs, including those concerning vampires, and she wrote a number of books and articles about her experiences. I am sure that also here is a good deal of ideas to inspire novelists, bringing 'the European vampire, the creature of the Old World' further back home.