The Philosophy of Spirits, Apparitions, Etc. 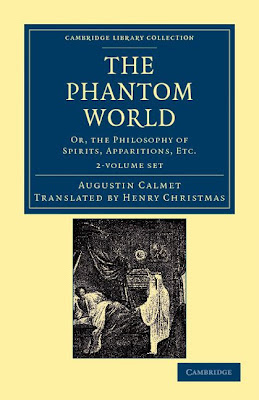 Cambridge University Press has reissued Henry Christmas's translation of Calmet, The Phantom World, as a set of two paperbacks. Available at at RRP of £39.00, it appears that there is no new material, like e.g. an introduction:

'The Benedictine monk and biblical scholar Antoine Augustin Calmet (1672–1757) published this work in 1746; it was translated into English in 1850 by Henry Christmas (1811–68). It examines a wide selection of supernatural tales and beliefs from across Europe. Taking the stance of a scientific enquirer, Calmet sought to understand the truth behind stories of good and bad angels, vampires, witchcraft, possession by demons, and the dead who come back to life. He compiled accounts of the supernatural from official reports, newspapers, eyewitness accounts and travel writing, and this two-volume anthology of his collected data analyses the material, noting problems and inconsistencies. Volume 1 investigates the appearance of good and bad angels, magic among the Greeks and Romans, sorcerers and witches, and possession by demons. Volume 2 investigates tales of vampires and ghosts across many different European countries.'

Henry Christmas (1811–1868), according to Wikipedia, 'at the end of his life going by the surname Noel-Fearn, was an English clergyman, a man of letters and editor of periodicals, known also as a numismatist.'

Also in the Cambridge Library Collection is a two volume edition of Emily Gerard's The land Beyond the Forest.
Posted by Niels K. Petersen at 16:12