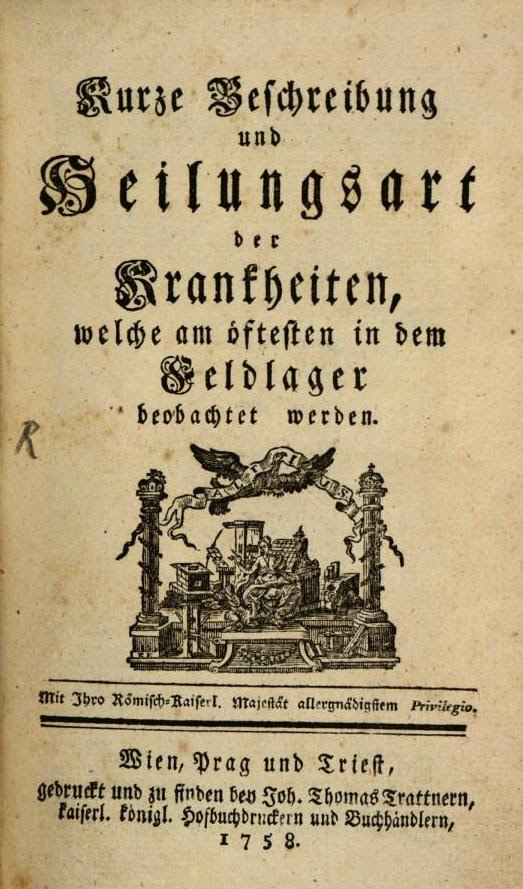 Just a couple of years after dealing with vampirism, Gerard van Swieten published a book on the most frequent diseases found among the troops in the field: Kurze Beschreibung und Heilungsart der Krankheiten welche am öftesten in dem Fedlager beobachtet werden was published in 1758, i.e. during the Seven Years' War, and deals with both major and minor afflictions among soldiers, diarrhea, fever, epistaxis, venereal diseases, they are all here with a description of remedies.

The book is not aimed at experienced doctors, but rather at all those people who attended on the numerous ill soldiers, but required more knowledge to identify ailments and diseases and know how to remedy them.

Van Swieten also supplies advice on hygiene like cleanliness and how to act in circumstances like e.g. rainy weather, when it is necessary to avoid the rain from entering the tents.

'Although in general the Austrian soldier received better medical care than his contemporaries in many other armies, Austria did not possess a military medical academy until the 'Josephinium' was established in Vienna in 1785. The medical establishment was reorganizaed in 1746, and although a military surgical school was not created until 1781 (at the military hospital at Gumpendorf), from 1750-1751 the only medical personnel appointed to army positions were those who had been proved medically comptetent. This eliminated the half-trained amateur and those insufficiently skilled to practise medicine in a civilian capacity; both could be found in the medical services of other armies. (---) Above the staff surgeons and at the head of the medical department was the Protomedicus, who was responsible not only for the appointment of competent medical personnel but also for the organization of and medicinal supplies for the army's medical service. In consequence of putting conscientious individuals at the head of the medical organization, by the start of the Seven Years' War the Austrian wounded and sick probably received better treatment than those in any other army, though the constraints imposed by contemporary medical practice still rendered the plight of the wounded pitiable indeed.'
Posted by Niels K. Petersen at 21:48