A vampire recently haunted a Serbian village, if we are to believe Serbian newspapers and national TV. I have a reader of this blog, Predrag Djordevic, to thank for kindly informing me.

According to a news story from September 17 in PressOnline, a vampire has terrified the inhabitants of a village called Gornje Stopanje located by the river Jablanica near Leskovac in Southern Serbia!

The vampire apparently haunted one of the village streets (seen in the photo below), causing the people to stay indoors from dusk till dawn. There was unexplained knocking at the gates, windors and doors, scratching on walls, and breaking of glass. The animals were disturbed, and dogs kept barking all night.

A woman called Ljiljana Stefanovic saw the vampire or spirit and describes it as a shadow in the form of a man. Some young men were brave enough to try to take photos of the spirit and claim to have photos that show the shadow like spirit or vampire.

The villagers asked two priests to help them against the vampire, and their prayers seem to have made the vampire calm down. The villagers also carry grass in their belts to keep the evil away.

Senior villagers are not surprised of the incident, because they are familiar with stories of vampires and spirits.

A professor called Sreten Petrovic says that there are still many people in Serbia who believe in vampires, particularly in Eastern Serbia. He refers to a legal case in Nis in which people were accused of being vampires. 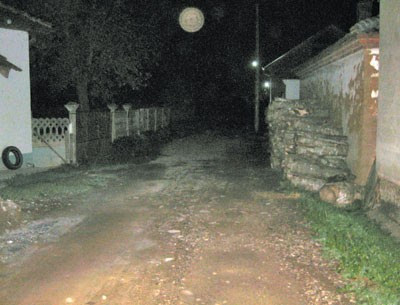 Unfortunately, as I do not read the language, this is as best as I am able to understand the story. There are quite a number of web sites referring to this news story, most of them more or less identical. Below is a video about the vampire, but I am unable to tell you what they say (click on the screen icon to view it fullscreen). If anyone can enlighten me on the details of the story, I will post more information here.

This is not truth. I'm from Serbia, and I can tell you that there are only plenty of ignorence.

this is truth its in southern serbia!Yazmine Stop Shit! iliti ne seri bre pa vidis vljda tv b92! IM SERB FROM BELGRADE THIS IS OUR TV!