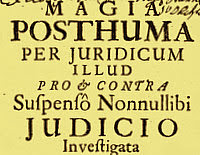 So now I have it, the Magia Posthuma by Karl Ferdinand von Schertz, or at least a micro film of it. On the left I have placed a portion of the title page, the full title being MAGIA POSTHUMA PER JURIDICUM ILLUD PRO & CONTRA Suspenso Nonnullibi JUDICIO Investigata à CAROLO FERDINANDO DE SCHERTZ, ÆRÆ SALUTIFERÆ UBI PACISCENDVM.

One thing I have discovered, is that the book was in fact probably published in 1704 and not in 1706 as is usually stated (although 1704 has been pointed out by some, see e.g. here). At least at the end of the book it says:

And I have not noticed the year 1706 being mentioned anywhere.

So now I have to translate the (mostly) Latin text and look more into the references etc. in the book.
Posted by Niels K. Petersen at 21:50

Just writing in to congratulate you on your excellent find!

And what do you know...it looks like Faivre was right about the publication date!

This leaves an interesting quandary in regards to the year of publication: why did Calmet (among others) think it was published in 1706? Could they have been referring to an elusive second edition?

All the same, you have come across a brilliant find in the annals of vampire research and I once again congratulate you and your efforts in tracking it down.

I also eagerly look forward to reading your translation.

The bibliographies that I have hitherto relied on have all claimed that it was published in 1706. This may still be true, as there is oddly no publication date on e.g. the title page, but two dates during 1704 are mentioned at the back of the book where three people (censors no doubt) have approved of the contents and publication of the book. One is from July 1704, the other from February 1704. It would seem unlikely that the printing of the book should have been postponed for more than one and a half year, but what is now certain is that von Schertz had written the book by 1704.

Considering the rarity of the book, I find it unlikely that further editions were published.

Were the bibliographies relying on Calmet's word?

Interestingly, you've shown that Calmet has mucked-up elsewhere, in your "The spectre Mævia" blog entry.

Considering how many writings on the vampire stem from Calmet's work...how much else did he get wrong?

Your discovery of this manuscript will certainly shine a light on a lot of erroneous material that has been written over the years.

I wholeheartedly agree with you, as well, that a republication - and critical assessment - of Calmet's work, needs to take place.