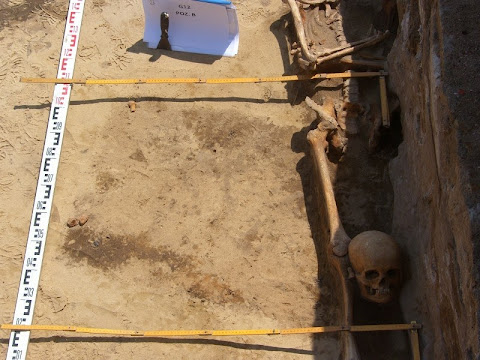 While constructing a ring road in Gliwice in South West Poland, formerly part of Silesia, four skeletons were found with their heads cut off and e.g. placed between the skeleton's legs. Archaeologist Dr. Jacek Pierzak says that it is hard to date the skeletons, but they are believed to come from the early modern period. Tests will date them and may provide a better understanding of whether they were e.g. victims of a cholera epidemic, executed criminals, or indeed people who the locals wished to prevent from becoming revenants.

The latter theory has made some Polish web sites write about incidents of vampirism in the areas that are now part of Poland, and, of course, Silesia was one of the areas where beliefs in magia posthuma was not uncommon in the early modern period. The press mentions a more recent example from the village Stare Mierzwice  Masovia, about 100 km to the East of Warsaw, where in 1914 a corpse was dug up, beheaded, and the head placed between the legs.

Thanks to Leon Aguilera Radford for notifying me of this news story.
Posted by Niels K. Petersen at 08:34