The frightening borderlands of Enlightenment 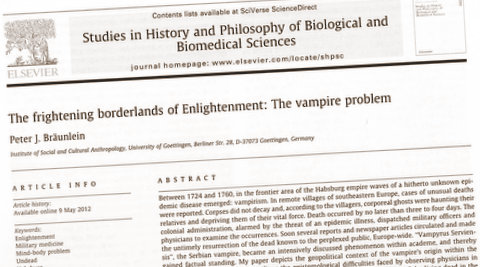 The 'dynamic of historical change may have been less dialectical than is generally supposed,' is a quote from a book by David Lederer, that Peter J. Bräunlein uses in his introduction to his paper entitled The frightening borderlands of Enlightenment: The vampire problem (Studies in History and Philosophy of Biological and Biomedical Sciences 43 (2012), p. 710-719). I would suppose that it is unsurprising to readers of this blog, that the vampire debate of the 18th century clearly is not another - to use Bräunlein's phrase - 'episode to the successful series 'Science Conquers Superstition'', or as Bräunlein writes in his conclusion:

'Within the discursive field of vampirism, various expert cultures were active. On closer inspection, however, it becomes clear that the vampire debate does not lend itself to the construction of an opposition between science and religion. The existence of this dichotomy is widely assumed, but that is to read the present back into the past. Eighteenth-century physicians and theologians were both equally interested in the question of whether 'the relationship between the dead body and an illness of mind and body should be understood as a sympathetic, astral or diabolical effect' (Hamberger, 1992, p. 167). In the first half of the eighteenth century, we are not dealing with a single epistemic competition so much as a plurality of forms of knowledge, observing one another critically even as they communicated with one another.'

Personally, this is a major part of the fascination with the topic, so it is interesting to read Bräunlein's take on the complexity of issues at play. The paper is, to my knowledge, also one of the few texts in English that relates the eighteenth century development of the 'Vampyrus Serviensis' in relatively great detail, no doubt attracting some more interest to the subject. 'Vampires are good to think with,' as he says, and here is at least food for thought, as Bräunlein e.g. addresses questions regarding the attitudes under Ottoman rule towards vampires and the safe passage of deceased people from this world. Overall, however, he questions the widespread myths about Enligthenment, science and 'disenchantment', while also stressing that the complexity of the vampire in all his shapes and forms it takes deserves more analysis. Enlightenment does not necessarily lead to a disbelief in revenants: 'The idea that progress in knowledge will inevitably lead to factuality and truth is a dream of Enlightenment, and of some historians.'

I am, however, a little concerned to read that, 'In Viennese circles, it was even put about that a princess Eleonore von Schwarzenberg (1682-1741), was a practising vampire.' Only the well-known TV documentary is referred to as a source for this claim, so I have yet to see evidence that this princess was indeed believed to be 'a practising vampire,' whatever that should have been at the time. This, however, is just a detail that has no bearing on the premisses and conclusions of the paper.

Peter J. Bräunlein is Professor at the Institute for Social and Cultural Anthropology at the University of Göttingen.
Posted by Niels K. Petersen at 17:18