Celebrations of the memory of Bram Stoker as theatrical manager and author are still ongoing, and the Irish An Post marked the centenary of Stoker's death with two stamps depicting Stoker himself as well as his most famous fictional creation, Dracula. The stamps are available at face value, including the minisheet shown below on top of the sheet published in 1897 to celebrate the centenary of Dracula itself. Click on the photo for a more detailed look, or go to An Post's shop if you are interested in purchasing the stamps. The new stamps are designed by David Rooney.

Considering the use of the written word in various formats, including a number of letters, in the novel itself, and the enormous amount of letters Stoker must have written while working for Henry Irving, stamps are a fitting way of celebrating Stoker and his vampire. 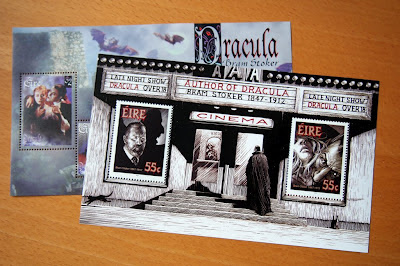 Oh, and by the way, having spent some hot and sunny days in the Western part of the Mediterranean Sea here in July, it is interesting to note that it is at the same time of year that the Demeter experienced 'rough weather' while journeying to the Gibraltar Strait. I suppose that, although Stoker meticulously dated the events of the novel, one recalls the events and not the context. But then it is perhaps even more unpleasant that Count Dracula conjures up a storm in late July. Following the novel more or less 'in real time' via the Dracula blog allows one to be reminded of the timing of the events.
Posted by Niels K. Petersen at 08:00