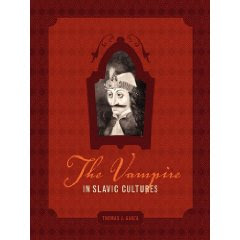 P.S. I hope I don't frighten you by showing the two book covers at the top - they are not exactly in the best taste!
Posted by Niels K. Petersen at 12:22

You are going to cost me a fortune in book purchases!

I wasn't even aware of that Vampires in Slavic Cultures book!

Plus, just the other day, I put in an order for the catalogue mentioned in "'Let's Save Dracula!'."

It looks gorgeous. And, I admit, I'm a sucker for the reproduction of those old vampire documents.

Oh, and not sure if you caught it, but someone on eBay is selling a facsimile of Putoneus's 1732 work.

I googled "vampire slavic cultures." Are you aware that that's the title of a current academic course? The syllabus looks fascinating!

Uh...the US $148.95 price tag of J. Thomas Garza's The Vampire in Slavic Cultures is tad off-putting, though.

From initially googling for the title, I did come across mentions of the course you refer to.

You're right though, the syllabus does look fascinating.

I particularly enjoy the coverage from a Slavic perspective, due to the vampire's origins amidst these peoples.

The titles of some of those subjects would be the basis of some great articles or books in themselves!

Thanks for the link in your post! Appreciate it! I'm going to add you to my blogroll :)