From Demons To Dracula 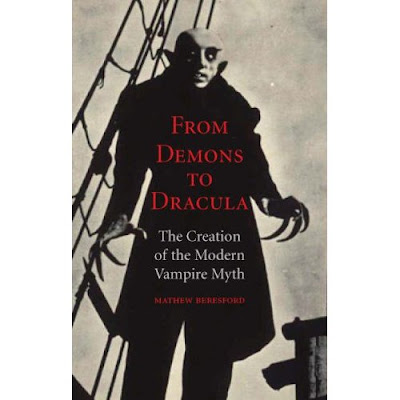 I recently mentioned the forthcoming book From Demons to Dracula: The Creation of the Modern Vampire Myth by Matthew Beresford. I have been contacted by the author who informs me that he is an archaeologist, tutor in Adult Education and freelance writer based in Bolsover, Derbyshire in the UK.

The book will be published by Reaktion Books in the UK on October 8th, and in USA on November 15th. Beresford tells me that, "it’s purpose is to argue for an evolution for the vampire and how this created the modern myth, from the early demon forms of the Ancient World, early ideas on death, burial & the afterlife, early Medieval beliefs and legends, the witch trials and plagues of the Middle Ages, the folklore of Eastern Europe, the Victorian Literature of 19th century England and the many film adaptations and on-screen vampires, as well as modern cases of the phenomenon."
Posted by Niels K. Petersen at 13:04

Let's hope it lives up to its premise and has something fresh and original to say about the Vampire Myth.