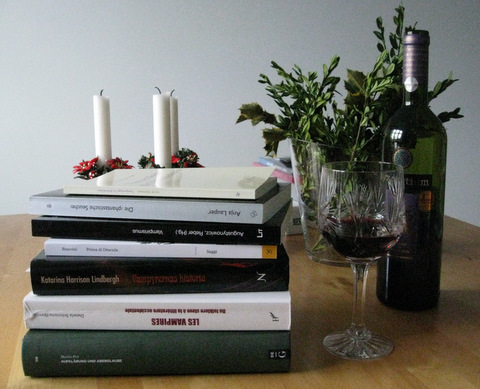 On the penultimate day of 2011 it is time to sit down with a glass of wine - in this case a Romanian Rosso di Vallachia - and list some of the books that the year brought.

The scope of the vampire debate requires an investigation on its own, Martin Pott wrote in 1992 in his book on the early German Enlightenment's critique of superstion, Aufklärung und Aberglaube ('Die Breite der damaligen Diskussion würde eine eignene Untersuchung erfordern'), and although Klaus Hamberger's books in some respects provided that investigation, I think it is only in recent years that some researchers have tried to follow up on Pott's suggestion.

Fortunately, Pott's own book was reprinted by De Gruyter this year, and is now available as either a hardcover book (at the bottom in the photo) or a pdf file for € 89.95. A more detailed discussion of the meaning of the superstition and its role in the German intellectual climate in the late 17th and early 18th century you will probably not be able to find elsewhere. Only a few pages are devoted to the vampire debate, hence his comment on the scope of it, but parts of that investigation can be found in other books published this year.

This is certainly the case of Anja Lauper's Die "phantastische Seuche": Episoden des Vampirismus im 18. Jahrhundert, which analyses the discourse of the 18th century debate on vampires, but it can also be said of some papers in the collection from the conference in Vienna in 2009, Vampirismus und magia posthuma im Diskurs der Habsburgermonarchie edited by Christoph Augustynowicz and Ursula Reber, cf. the list of contents.

But also some more general works on the topic are worth noting. I have chosen to include the Swedish book, Vampyrernas historia by Katarina Harrison Lindbergh, because it is a commendable example of a more modern and in some, although not all, aspects reasonably up to date study of the subject. I have mentioned it in a post on supposed evidence of revenants and vampires in archaeology, because she includes some considerations on this subject, but I should add that most of the book concerns the fictional vampire.

Finally, Vampyrologie für Bibliothekare: Eine kulturwissenschaftliche Lektüre des Vampirs, by Eric W. Steinhauer, is an enjoyable little book on vampires, books and libraries, acknowledging the vampire as both a historical and cultural phenomenon.

The sad thing about this list is that, unfortunately, apart from my own contribution to Vampirismus und magia posthuma im Diskurs der Habsburgermonarchie, none of these books are written in English. Maybe I have overlooked a book in English, but so far it is still necessary to acquire some skills in other languages, in particular German, to keep up with recent research.

Where English language research, however, is strong, is in the field of the fictional vampire, and some of us are probably curious to see the forthcoming book by Elizabeth Miller and Dacre Stoker: The Lost Journal of Bram Stoker which contains a recently found notebook written by Bram Stoker between 1871 and 1881. It  will no doubt give us some insights into the creative mind that created the vampiric count Dracula, but if you are interested in the historical background, you will profit from acquiring some of the aforementioned books in German, French and Italian.
Posted by Niels K. Petersen at 14:20