'Vampire skeletons', a Bulgarian Indiana Jones and the remains of John the Baptist

More than a month has now gone by since the hype about the Bulgarian 'vampire skeletons' spread across the globe. Since then, the Bulgarian Finance Minister, Simeon Djankov, has stated that the Bulgarian government is planning to slate additional funding for archeological excavations on the southern Black Sea coast, and one of the skeletons from Sozopol is now in Sofia, and as far as I have understood on display at the National Museum of History.


Vampire skeleton on display in Bulgaria by Zoomin_Canada

Another 'vampire skeleton', found in Veliko Tarnovo, was ritually reburied by the archaeologists who found it led by Professors Nikolay Ovcharov and Hitko Vachev. This skeleton of a medieval man had been buried with his hands and feet tied, and with pieces of ember inside his grave.

Ovcharov, who according to novinite is nicknamed 'the Bulgarian Indiana Jones', reburied the skeleton according to an 'ethnographic ritual in which the "vampire's" bones were cleansed with wine and water, and were placed together in a new grave close to the old one together with the lighting of candles in the Bulgarian Orthodox Christian tradition,' cf. the photo below. 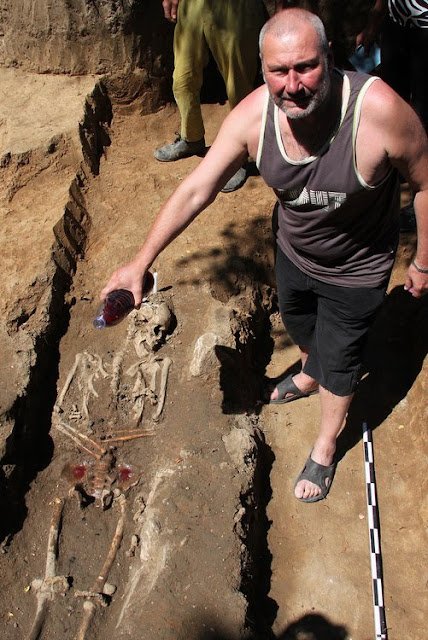 As pointed out by 'bshistorian' in a couple of comments to an earlier post, there are several things that are hard to understand from just reading the news stories and looking at the photos and videos of the corpse. So to what extent the find is actually related to revenant or vampire beliefs seems hard to say.


Bulgaria Looks to Suck the Vampire Legend Out of... by NewsLook

Some of the archaeologists involved are certainly characters. What are we to think of archaeologists led by a 'Bulgarian Indiana Jones' who perform 'ethnographic rituals' on a medieval skeleton, and what about the director of the National Museum of History, Bozhidar Dimitrov? According to Wikipedia, he is also a prominent politican and former Minister without portfolio. As a historian he has written polemically on the ancestry of the Bulgarians and 'macedonism'. Incidentally, he was born in Sozopol where the 'vampire skeleton' now in display in Sofia was found.

Generally, the Bulgarians appear to have a fondness for sensationalistic claims with regards to some of their archaeological discoveries, as is evident from the news story below on the possible finds of the remains of John the Baptist in Bulgaria. Curiously, the discovery was made near Sozopol, and like the 'vampire skeletons' attracted a lot of attention. The remains have been transferred to the Orthodox Church where they lay in state in the St. George Church in Sozopol. Because the theory is not refuted, obviously there are many people who hold on to it for various reasons. Obviously, some Bulgarian archaeologists and politicians hope to attract tourists who are intrigued to see 'vampire skeletons'.

When the discovery of 'John the Baptist' was made, the same Finance Minister who has now stated that more funds will be set aside for archaeological excavations on the Black Sea coast, Simeon Djankov, plainly said: 'As soon as this amazing archaeological discovery was made, I made some research, and found that such finds generate great returns from tourism and pilgrimage. Bulgaria and this region will now enter the world tourism maps as a pilgrimage site. The fact that this is a sea resort provides for an unique combination between cultural and sea tourism.' Scientists do not exclude the possibility that remains found in an ancient reliquary in a 5th century monastery on Sveti Ivan Island in Bulgaria may belong to St John the Baptist.

On Thursday, a team of Oxford University archaeologists announced they have provided scientific evidence to support the extraordinary claim.

The findings are to be presented in a documentary to be aired on The National Geographic channel in Britain on Sunday, The Telegraph informs.

The research team dated the right-handed knuckle bone to the first century AD, when John is believed to have lived until his beheading ordered by king Herod.

Scientists from the University of Copenhagen analysed the DNA of the bones, finding they came from a single individual, probably a man, from a family in the modern-day Middle East, where John would have lived.

The findings do not prove anything, but they also do not refute the theory initially presented by Bulgarian archaeologists that the remains in question may indeed belong to St John the Baptist.

The remains were uncovered on July 28, 2010, during excavations of the floor of the medieval monastery on Saint Ivan island, near Bulgaria's historical, coastal town of Sozopol. They were placed in a sealed reliquary buried next to a tiny urn inscribed with St. John's name and his birth date.

The Bulgarian government decided to benefit from the discovery to boost tourism, going as far as to say that Sozopol will help deal with the economic crisis by becoming the new Jerusalem on the Balkans, attracting believers from all over the world.'
Posted by Niels K. Petersen at 10:28