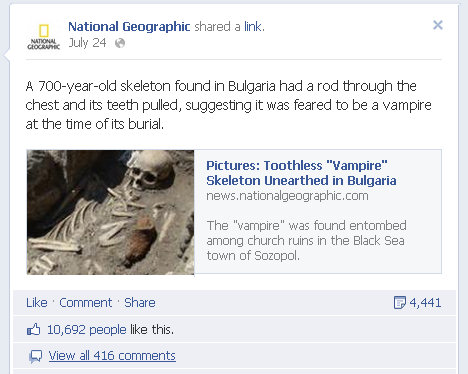 As I pointed out when the 'vampire skeleton' from Sozopol in Bulgaria made the news, the number of visits to this blog exploded when people (particularly in USA) went in search of 'vampire skeletons'. Now a recent short news story on the subject on the National Geographic web site has attracted a lost of interest on Facebook, becoming the most shared news story in four months, according to novinite.com. As of writing, it has been shared 4.441 times and 10.692 people have 'liked' the story.

According to National Geographic, 'the skeleton's teeth [or rather some of them, ed.] had been pulled. Scholars believe the rod and tooth-pulling were techniques villagers used to prevent dead men from turning into vampires.'
Posted by Niels K. Petersen at 14:25

This post apparently inspired the so-called bshistorian to write this piece on his blog: Of Bulgarian Vampires.