Another twist on Vampire Tourism

Vampire tourism is a term that I have used several times over the years on this blog, so it is curious to find it in the news: 'Vampire' tourism in Bulgaria? reports that 'the considerable interest from abroad (in the Bulgarian 'vampire' skeletons discovered in Sozopol) can prove to be a perfect opportunity for popularizing Bulgaria's traditional folklore and its bizarre creatures and tales around the world.

Who knows, maybe a movie based on Bulgarian folklore can pour some fresh blood into the repetitive vampire film industry (pun not intended)?

Bulgarian tour operators have been quoted saying that the interest has been huge and Germans, Brits and Russians have already inquired about "vampire vacations" in Sozopol.

I do not want to discourage potential tourists, but travelling all the way to Bulgaria to see a skeleton pierced with an iron rod feels like a lame idea.

Firstly, Bulgaria has much more fascinating stuff to offer as a tourist destination, and secondly, vampires are truly great, but they belong to fiction. Looking at perfectly normal skeletons placed in a museum is not the point.' Another news story, Vampire Hype to Boost Bulgaria's Tourism, provides some more insights to the archaeological find in Sozopol - and there is even a Venetian connection:

'People on three continents are excited about Bulgarian vampires in the wake of local archeologists claiming to have found a vampire skeleton in the Black Sea town of Sozopol.

The skeleton was the one of a buried man with an iron stick in his chest. He was buried over 700 years ago and was stabbed multiple times in the chest and the stomach, as his contemporaries feared that he would raise from the dead as a vampire, National History Museum Director, Bozhidar Dimitrov, told local media.

The Bulgarian Standard daily, which published a series of articles on the discovery, reports Thursday that media in the US, Europe and Asia have all broken the news in the press and in online editions.

The story found its place in two articles of the most-read tabloid in the world – The Daily Mail, in the Washington Post, BBC, and a number of Russian media.

Meanwhile, Bulgarian tour operators are quoted saying that the interest has been huge and Germans and Brits have already inquired about "vampire vacations" in Sozopol. There is an expected increase of visits from the US and Russia as well, while long lines are reported at the excavation site near the Saint Nicholas Wonderworker monastery.

Speaking for Standard, Bozhidar Dimitrov explained that the vampire's name was Krivich (The Crooked) and he was a legendary pirate, manager of the Sozopol fortress or one of his heirs.

The Crooked, as his contemporaries called him, has been a crippled, but extremely intelligent man. He outshined everyone with his knowledge about the sea, the stars and herbs. Byzantine chronicles describe how he plundered a Venetian ship. It is possible that he was declared a master of the witchcraft because of these talents, which explains the metal stake through his heart.

Experts also believe that the man may have been an intellectual and perhaps a medic, as such individuals often raised suspicions in the Middle Ages. The grave was discovered near the apse of a church, which suggests that he was an aristocrat.

According to archaeologists, this is the first time a "vampire" burial has been discovered in Sozopol.

Over 100 buried people whose corpses were stabbed to prevent them from becoming vampires have been discovered across Bulgaria over the years, according to Dimitrov.'

According to Focus, the skeletons will be on display at the National Museum of History in Sofia: 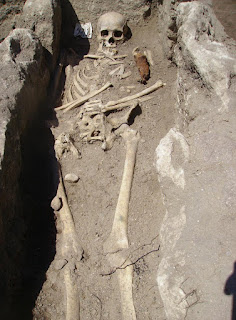 'The vampire burial unearthed in the seaside city of Sozopol will be displayed in the National Museum of History in Sofia due to the keen interest in Bulgaria and abroad, museum director Bozhidar Dimitrov told FOCUS News Agency.

The vampire will be displayed in about ten days when the special glass case in which it will be laid is ready.

On Tuesday AFP reported that archaeologists in Bulgaria unearthed two skeletons from the Middle Ages pierced through the chest with iron rods to keep them from turning into vampires.

According to pagan beliefs, people who were considered bad during their lifetimes might turn into vampires after death unless stabbed in the chest with an iron or wooden rod before being buried.

"These two skeletons stabbed with rods illustrate a practice which was common in some Bulgarian villages up until the first decade of the 20th century," national history museum chief Bozhidar Dimitrov said after the recent find in the Black Sea town of Sozopol.

People believed the rod would also pin the dead into their graves to prevent them from leaving at midnight and terrorizing the living, the historian explained.

The practice was common, Dimitrov added, saying some 100 similar burials had already been found in Bulgaria.

Archaeologist Petar Balabanov, who in 2004 unearthed six nailed-down skeletons at a site near the eastern town of Debelt, said the pagan rite was also practiced in neighboring Serbia and other Balkan countries.'

It's been a while since I did any actual archaeology, but although the ribs appear disarticulated, the 'stake' itself seems to pass between the ribs and left arm.

As ever, I suppose we'll have to wait for an academic publication, and hope for a translation.

I don't understand the claim that high status individuals might be suspected of vampirism. From all I've read, the opposite is true, and if a well-preserved body of a religious figure IS uncovered in history, it is typically put down to divine intervention and the individual is sainted!