Something for your home?

Making it onto BBC's web site, Tennants Auctioneers in North Yorkshire, UK, is auctioneering this kit off on June 22: 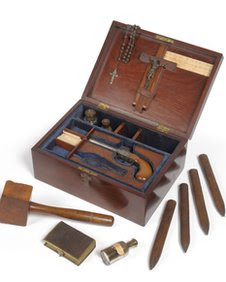 'One piece in particular, (drawing attention from both the UK and America) is an unusual 19th century vampire slaying kit, which almost complete and in good condition, can be dated to after Bram Stoker wrote the famous Dracula novel, which popularised the vampire character and possibly started the trend of vampire slaying kits. The mahogany casket, complete with percussion cap pistol, steel bullet mould, mallet and stakes, Rosary beads, glass bottles, prayer book dated 1857 and crucifix, which was found in the cellar of the vendors deceased uncle, is in good condition and expected to make £1500-2000. It will certainly be exciting to see where the casket ends up; perhaps with many scenes of Bram Stokers novel being set in the Yorkshire seaside town of Whitby, the vampire slaying kit might only make a short journey after the sale. With live internet bidding on the day however, and already genuine international interest, it could end up overseas!.'

These kits have been the subject of discussion on various web sites and blogs, and a whole article was devoted to them in a recent issue of The Fortean Times. Here Jonathan Ferguson writes that the standing record for one of these kits is no less than $26,400! The first one on auction apparently turned up in 1994 at Sotheby's. Fetching $12,000, it probably inspired others to create similar faux kits. Although fake, there are no doubt a number of people out there who would like to have this kind of item. It would certainly inspire some interesting discussions at any party...

Related links: A list of vampire killing kits, Jonathan Ferguson's blog, and one of a number of posts on the subject on The Vampirologist blog.

Thanks to Mr. Ranft for notifying me of this news story.
Posted by Niels K. Petersen at 08:14

It's no good without an instrument for cutting off the head. There should ideally be a Bowie knife included.

The death of Dracula narrated by Christopher Lee: http://youtu.be/LBBLDctDM5Y

Many of these kits are, I think, supposed to (appear as if they) predate Stoker's Dracula, and in many cases have a 'mythology' of their own. Still, someone could of course claim to have found the original tools used by Quincey Morris, John Seward and co.