'Ever heard of the Jewett City vampires?'

'Scraping away soil with flat-edged shovels, and then brushes and bamboo picks, the archaeologist [Nick Bellantoni] and his team worked through several feet of earth before reaching the top of the crypt. When Bellantoni lifted the first of the large, flat rocks that formed the roof, he uncovered the remains of a red-painted coffin and a pair of skeletal feet. They lay, he remembers, “in perfect anatomical position.” But when he raised the next stone, Bellantoni saw that the rest of the individual “had been com­pletely...rearranged.” The skeleton had been beheaded; skull and thighbones rested atop the ribs and vertebrae. “It looked like a skull-and-crossbones motif, a Jolly Roger. I’d never seen anything like it,” Bellantoni recalls.

Subsequent analysis showed that the beheading, along with other injuries, including rib fractures, occurred roughly five years after death. Somebody had also smashed the coffin.

The other skeletons in the gravel hillside were packaged for reburial, but not “J.B.,” as the 50ish male skeleton from the 1830s came to be called, because of the initials spelled out in brass tacks on his coffin lid. He was shipped to the National Museum of Health and Medicine, in Washington, D.C., for further study. Meanwhile, Bellantoni started networking. He invited archaeologists and historians to tour the excavation, soliciting theories. Simple vandalism seemed unlikely, as did robbery, because of the lack of valuables at the site.

Finally, one colleague asked: “Ever heard of the Jewett City vampires?”'

The October 2012 issue of the Smithsonian magazine contains a lengthy article on The Vampire Panic in New England, i.e. the numerous instances of corpses being treated in various ways to avoid vampirism, of which the case concerning Mercy Lena Brown is probably the most publicized.

Michael E. Bell, author of the well-known Food for the Dead: On the Trail of New England's Vampires, is, of course, one of the sources for the article. According to the version of the article available on Smithsonian's web site, 'a consulting folklorist at the Rhode Island Historical Preservation & Heritage Commission for most of his career, Bell has been investigating local vampires for 30 years now—long enough to watch lettering on fragile slate gravestones fade before his eyes and prosperous subdivisions arise beside once-lonely graveyards. 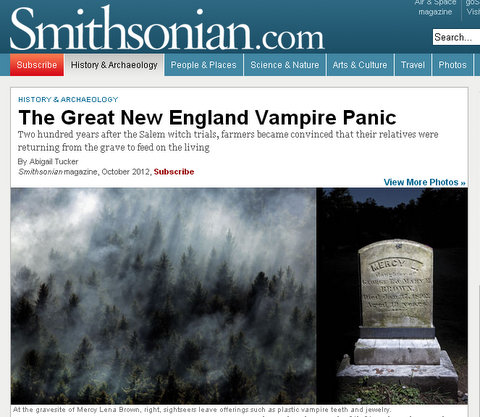 He has documented about 80 exhumations, reaching as far back as the late 1700s and as far west as Minnesota. But most are concentrated in backwoods New England, in the 1800s—startlingly later than the obvious local analogue, the Salem, Massachusetts, witch hunts of the 1690s.

Hundreds more cases await discovery, he believes. “You read an article that describes an exhumation, and they’ll describe a similar thing that happened at a nearby town,” says Bell, whose book, Food for the Dead: On the Trail of New England’s Vampires, is seen as the last word on the subject, though he has lately found so many new cases that there’s a second book on the way. “The ones that get recorded, and I actually find them, are just the tip of the iceberg.”'

According to Howard Peirce, who kindly notified me of the article, the internet article does not correspond to the one in the printed magazine, so it may well be worth the while to seek out a copy.

The Smithsonian has previously dealt with vampire related subjects. I have a copy of the February 1975 issue which contains an article on Vlad the Impaler and the Ceasescu era's interest in Dracula: 'Since he succeeded Gheorghe Gheorghiu-Dej upon the latter's death in 1965, Ceausescu has steadily solidified his powere base. And it is Ceasescu's appreciation of the potency of nationalism that has rekindled Romanian interest in the history surrounding the real Dracula - and has promoted the development of a tourist program which promises to bring Western visitors to Draculaland.'

I hope I didn't overstate the differences between the two articles; I think it's mostly a question of editing, with the print version a bit more tightly edited.

I don't think there are substantive differences, but I no longer have the print article at hand.