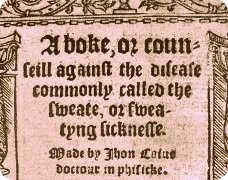 'It is hard now to really imagine the social chaos and trauma of severe plague outbreaks. Perhaps the best modern fictional resemblance occurs in Danny Boyle's 2002 film 28 Days Later, with is bleak apocalyptic scnearios and violent social disintegration. But the plague at least gave many people some bare chance of preparing remecies, or of simply composing themselves for a good pious death. In 1485, just before the coronation of Henry VII, England was hit by an entirely unfamiliar disease whose combined ferocity and speed of attack are comparable to a widespread epidemic of SARS or Ebola. Its horrors still seem fresh decades later, as recalled in 1552 by the physician John Caius. Where the plague might take between four and fourteen days to decisively claim its victims, the sweating sickness "immediately killed some in opening their windows, some in playing with children in their street doors, some in one hour, many in two it destroyed, and at the longest, to them that merrily dined, it gave a sorrowful supper. As it found them so it took them ... and in one house sometime three sometime five ... sometime more sometime all, of the which, if the half in every town escaped, it was thought great favour".'

Richard Sugg: Mummies, Cannibals and Vampires: The History of Corpse Medicine from the Renaissance to the Victorians (Routledge, 2011), p. 140
Posted by Niels K. Petersen at 15:53