I received David Keyworth's Troublesome Corpses the other day. Naturally, I will return to the book when I have read it, but in the meantime I will post a few facts about it, as very little is available on the internet (even the publishers mention only the basic data on their web site).

On the back flap it says that Keyworth has 'extensively revised' his thesis for this book, 'making it accessible to both an academic and a lay audience.' As for the contents, Keyworth summarises it briefly this way:

"Broadly speaking, in the initial chapters of this book, I present a historical survey of the undead-corpses that supposedly existed in Western Europe from antiquity to the eighteenth century and explore the evolving typology, phenomenology and comparative folklore of such revenants, so too the burial customs and prophylactic practices associated with the undead. The remaining chapters delve into the supposed aetiology and metaphysical mechanics of revenants and the theological explanations cited for their existence, the socio-religious history of the vampire infestations of the eighteenth century and the declining belief in revenants thereafter, and the increasingly popular notion of astral vampirism in the nineteenth century, noting that occasional reports of flesh-and-blood vampires continue to emerge in the twentieth century."

The paper on the uniqueness of the eighteenth century vampire I mentioned in a recent post is a summary of the first four chapters.

I have added an update to the post on 'Illustrating Keyworth'. Incidentally, there are no illustrations in Keyworth's book. 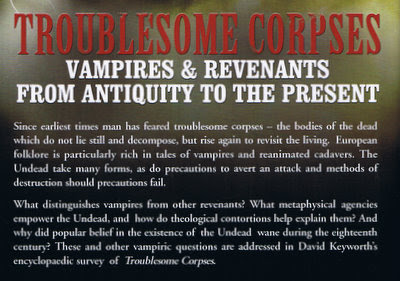 Your evaluation of the book titillated me enough to purchase a copy myself, and it arrived in the mail today.

I've barely gotten through the "Introduction" at this point, but it certainly appears to be appealing to my interest in the development of the vampire myth...not to mention its geo-centricity.